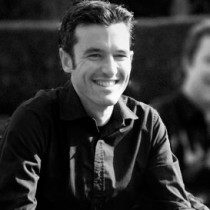 Alex South studied at Cambridge University before joining the postgraduate performance course at the RSAMD, where he was taught by John Cushing and Michael Huntriss. He has also studied with Nicholas Cox, Kate Romano and Henri Bok. Graduating in 2002, Alex now has a diverse freelance career with a strong focus on contemporary chamber music: a founder member of Research Ensemble, he also regularly plays with Auricle Ensemble and Daniel Padden’s improvising avant-garde folk group The One Ensemble. Notable recent performances include James MacMillan’s Tuireadh with the Edinburgh Quartet at a concert to celebrate the composer’s 50th birthday, the Scottish premiere of Mauricio Kagel’s Eine Brise for 111 cyclists and a concert of the music of Alvin Lucier at Stirling’s Le Weekend festival. Alex is a research partner at the Science and Music Research Group at Glasgow University, where he is developing a new microtonal clarinet wind synthesizer with composer Graham Hair.