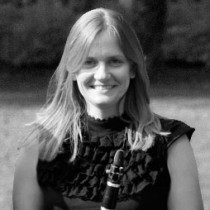 Frances Barker is originally from Richmond, North Yorkshire and began to play the clarinet at the age of ten. She moved to Scotland to study at the Royal Scottish Academy of Music and Drama and was twice a member of the winning ensemble in the RSAMD Governor’s recital prize for chamber music.

Frances performs throughout Scotland working with a variety of ensembles including the Royal Scottish National Orchestra, Scottish Concert Orchestra, and Symposia; she is also a member of the Scottish Reed Trio. Alongside her busy playing commitments Frances also holds teaching posts at The Mary Erskine School, Stewart’s Melville College and Morrison’s Academy.