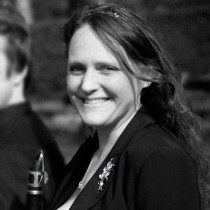 Nicola Long studied with John Cushing at the Royal Scottish Academy of Music and Drama in Glasgow, where she represented the Academy on commercial recordings, was a winner of the Governors’ Competition Prize for Chamber Music and the Mary D. Adams Prize for Excellence in Chamber Music, and successfully auditioned for the Royal Scottish National Orchestra apprenticeship scheme.

Since graduating from the RSAMD Nicola has performed with the Scottish Chamber Orchestra, Bournemouth Symphony Orchestra, London Sinfonietta and the touring Strictly Come Dancing show. Nicola is particularly dedicated to the musical education of children: she currently holds posts at St George’s School for Girls in Edinburgh and the High School of Glasgow, and is a deputy teacher for the RSAMD Junior Academy.